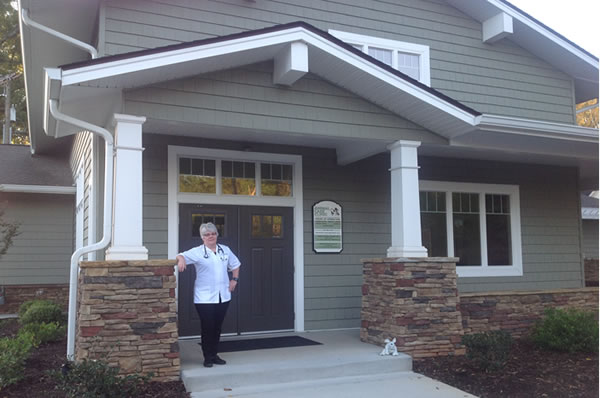 What is a Cost Segregation Study?  A cost segregation study, is a study performed by a qualified engineering firm to determine what portions of a building are eligible for shorter depreciable lives and accelerated depreciation, thereby deferring income taxes.  IRS regulations require commercial and residential buildings to be depreciated over 39 and 27.5 years respectively.  When real estate is acquired or constructed, absent any other data, the non-depreciable cost of the land is separated from the building and the building is depreciated.

Client Testimonial: "This year, Gordon, Keeter & Co. recommended we have a cost segregation study performed on our new veterinary clinic.  For the first time in years, we are excited about filing our income tax return and taking advantage of the tax savings from the study." - Dr. Melanie Moore, Animal Care Clinic of Concord (pictured at right)

A cost segregation study can be extremely beneficial by accelerating the depreciation expense.  The study determines what portion of the cost of the building is considered personal property to be depreciated between 5 and 15 years.  Amounts determined to be personal property may be eligible for special depreciation allowances, such as bonus deprecation and Section 179.

Do I Have to Own the Real Estate to Benefit from a Cost Segregation Study?  No.  If you have leased a facility where you have upfit costs that are considered leasehold improvements for your business, those costs are depreciated as if they are a part of the real estate subject to 39 or 27.5 year depreciation lives.  Those same costs can be reallocated based on a cost segregation study to accelerate the depreciation expense for those improvements.

Is a Cost Segregation Study Always a Good Idea?  No.  A cost segregation study is most beneficial when there is going to be a significant tax benefit that outweighs the cost of the study.  A study may not be recommended for a building with a low depreciable cost basis or a building that may be sold in the near future.  If a building is sold that has had a cost segregation study completed, the accelerated depreciation may have to be fully recaptured in the year of sale, potentially negating the tax benefits.  If the building is going to be sold through a 1031 (like-kind) exchange, the portion of the building reclassified as personal property would have to line up with the personal property portion of the real estate acquired to realize the full benefit of the 1031 exchange.

Is a Cost Segregation Study Expensive?  It depends.  There are many factors that determine the cost of the study. The cost is going to correlate to the size and sophistication of the building. The cost of a study for a warehouse type space would be much less than that of a building the same size used for a medical practice.  With a true warehouse type of space, there is probably not a lot of benefit to a cost segregation study, because the purpose of the study is break out the components of the building that are not considered structural in nature.  For example, basic electrical wiring to run the general lighting system of the building is considered a structural component.  However, wiring run specifically for equipment, such as copier systems or medical equipment, would be considered a part of the equipment it was put in place to run and therefore, depreciated like it is a part of the equipment (5 or 7 years with Section 179 and/or bonus depreciation allowed).  Therefore, the estimated cost of the study should be weighed against the tax savings when making a decision.

What are Some Types of Buildings that May See the Biggest Benefit?

Who Should I Contact to Determine if a Cost Segregation Study is Right for Me?  You should first contact your CPA regarding your specific situation to see if the current and long-term benefit is worth the cost.  You should also ask the cost segregation firm to give you a quote of the costs of performing the study and an estimate of the depreciation benefit.  Your CPA will help you analyze this information to see if the study is in your best interest.

If you would like more information on cost segregation studies and if you could benefit from such a study, please feel free to contact our office.

Try these 6 tips if you're currently paying back #StudentLoan debt: https://t.co/FUp2M5zPdA https://t.co/XiUjS0g0rp